To save a bear cub from cruel treatment in the Siberian city of Kyzyl, writer and animal rights activist Anna Arbatskaya drove it nearly 2,500 miles to a shelter in the southern Urals.

The bear cub, which was only one month old, was confiscated in the Siberian city of Kyzyl, the capital of the Tuva Republic 2,850 miles east of Moscow on Apr. 24 when a woman, who could not explain where the animal had come from, was seen walking it on a lead. At first she said that some friends had given it to her as a present, then that a taxi driver had left it with her; later that she had found it in the forest.

According to one theory, the woman may have been associated with poachers who had killed a male and female bear and planned to sell the cub to a circus or zoo. There are no animal shelters in Kyzyl, so via social media, the local natural resources and environmental protection watchdog body, Rosprirodnadzor, appealed for someone to give the bear cub a temporary home.

Anna Arbatskaya, a 33-year-old author and animal rights activist, comes from Kyzyl but for the past six months has lived in St. Petersburg. At the end of April she flew home with her younger daughter to collect some personal belongings and her car. For many years Anna had run an animal protection center. When she learned of the plight of the bear cub she decided to help. She soon discovered she was the only volunteer.

“In a matter of days the bear cub had pulled my apartment [in Kyzyl – RBTH] to pieces. Now the apartment needs repairs and new furniture. I called him Adyg, which in the Tuvan language means ‘bear’,” she says.

Simultaneously, she was looking for a new home for the bear. The problem was that there is only one rehabilitation center for bears in Russia and it is situated at the other end of the country, not far from Moscow.

In the meantime, in Bashkiria, which is at the foot of the Ural Mountains, employees at the local national park, Bashkortostan, were looking for a bear cub. They already had one – a baby bear that had come out of the forest and was found walking towards the city. For its rehabilitation, they urgently needed a second one because together bears learn more quickly. By networking animal rights campaigners from Tuva and Bashkiria made contact with each other and agreed that the bear cub should move to the national park.

Anna offered to deliver Adyg to Bashkiria herself – she was not concerned about the long distance as she is an experienced traveller and is used to long journeys. She prepared thoroughly for the trip: Some acquaintances made a spacious wooden cage for the journey and bought a box of baby food – porridge and buckwheat – for the bear. The animal had its medical inoculations done and all necessary accompanying documents were obtained in case the police stopped the car for a check. 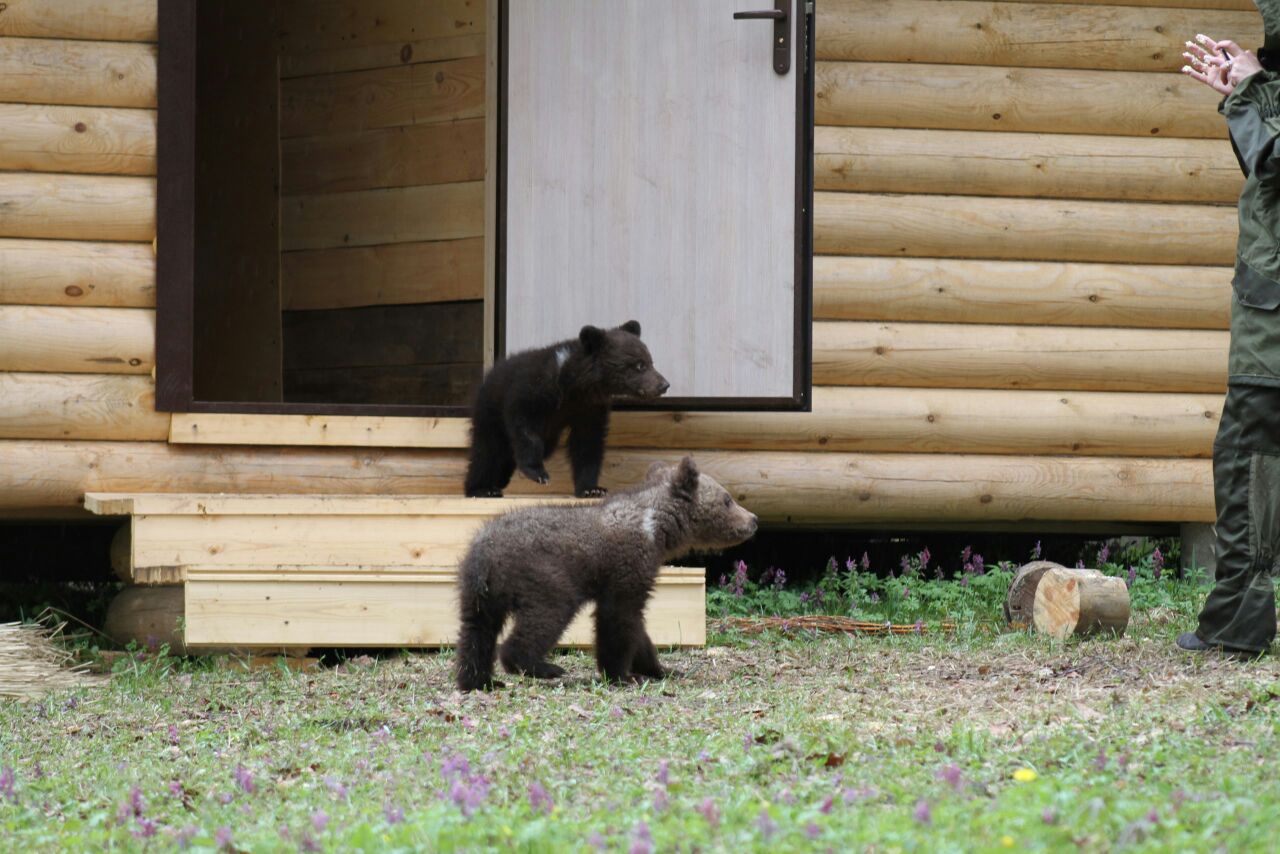 “We covered a thousand kilometers (600 miles) a day. We stopped every three hours to feed Adyg. Almost the whole journey I was accompanied by some long-distance lorry driver friends of mine in two trucks, who were going in the same direction. They showed me the way and helped to repair the cage, and we slept in the driver’s cab of their trucks,” Anna says.

Anna arrived at the national park in pitch darkness. That day she had driven for around 900 miles and was terribly tired. A separate little house had already been prepared for the cubs. Their first meeting was accompanied by squeals and shrieks – the experience was very stressful for both.

Vladimir Kuznetsov, director of the national park, says that in coming six months the two cubs will undergo rehabilitation – they will be taught how to survive in the wild and forage for themselves.

“In order for the animals not to get accustomed to humans, only two or three people, wearing the same clothes and with their faces covered, will approach the bears. Talking to the bears is also undesirable – the cubs will get used to it and stop being afraid of the human voice, and that is not a good thing in the wild. If everything goes well, by August or September we will release them and they will live inside our park,” he said.

Anna says that the cubs spent their first night together peacefully, and by the following morning they had stopped growling and fighting and were playing happily. It means that the worst is already over.